The MTRC operates the metro network of Hong Kong and the commuter rail network connecting the northeastern and northwestern New Territories to the urban area. The operations of the territory's two leading railway companies, MTRC and the Kowloon-Canton Railway Corporation (KCRC), were merged in 2007 on grounds of economies of scale and cost effectiveness.

The Hong Kong Government has an explicit stated transport policy of using the railway as its transport backbone.[1]

In addition to the MTR network, there are several smaller railways run by different operators, including the Peak Tram and the Hong Kong Tramways.

The first mode of rail transport in Hong Kong was the Peak Tram, serving The Peak, the Mid-levels and the city centre since 1888.

Tram started service along the northern coast of the Hong Kong Island in 1904. The British Section of the Kowloon-Canton Railway (later the KCR East Rail), a conventional railway, was opened in 1910.

It was not until 1979 that a rapid transit system, the MTR, was opened. 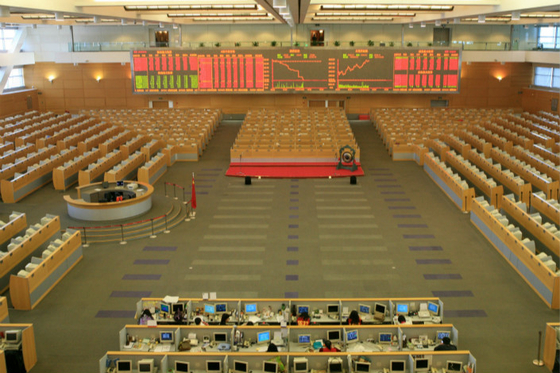 Three years later, the British Section of the Kowloon-Canton Railway began its transition towards electrification, changing it into a commuter rail, and eventually providing rapid transit-like service. The Light Rail Transit (LRT, now the MTR Light Rail) began its operation in the Tuen Mun and Yuen Long new towns in 1988. The two railway companies, MTR Corporation Limited and Kowloon-Canton Railway Corporation, merged in 2007 to form a single rapid transit network.

In 2018, the Guangzhou-Shenzhen-Hong Kong High Speed Railway opened to connect Hong Kong with the Mainland Chinese high speed network through a 26 km tunnel within Hong Kong to West Kowloon Station.

It has many train services to many Mainland Chinese cities such as Beijing, Guangzhou and Shenzhen.

There are several extensions planned or under construction, such as the Sha Tin to Central Link.

This system makes about $2 billion in profit in 2014 which is mainly generated from its property holding and development business.[2] Its portfolio include two of the city's tallest skyscrapers.[2]

Note that the MTRC Light Rail system (see above) has many of the attributes of a tramway, including street running.

The Hong Kong section opened for commercial service on 23 September 2018.[3] From West Kowloon Terminus, trains run through regional stations in Guandong Province, including Futian, Longhua (Shenzhen North), and Humen, to Guangzhou South Station and other cities in other provinces.[4][5]

A new railway connecting Guangzhou, Shenzhen and Hong Kong was proposed in the late 1990s by the Government of Hong Kong.

This Regional Express Railway (RER) proposal was developed in the 1994 “Railway Development Study” (RDS); it foresaw a continual growth of Hong Kong's population over the next two decades and strong demand for cross-border passenger traffic.[8] By 2002, the concept of “regional express” gained further development and the proposal was advanced to be a high-speed rail line.[9] Construction of the Hong Kong section began in 2010.

Following delays and controversies,[10][11][12] West Kowloon station was formally opened on 4 September 2018 and high speed trains started to run on the rail link to destinations in Mainland China from 23 September 2018.[13]

Commonly known as through train (chi.

直通車), the MTRC and railway companies of mainland China jointly provide cross-border train services from Hung Hom station, Kowloon, sharing most of the tracks with the East Rail line, to destinations in mainland China through neighbouring Shenzhen on three Through Train routes, namely Beijing line (to/from Beijing), Shanghai line (to/from Shanghai) and Guangdong line (to/from Zhaoqing and Guangzhou East). The Through Train is a legacy of Hong Kong's first railway, the Kowloon-Canton Railway.

It is operated through the rail network in mainland China, including the Guangshen railway and Jingguang railway.

There is an Automated People Mover (APM),[14] a driverless electric train service, which is located at the basement level of Terminal 1 of Hong Kong International Airport.

It travels the length of the 750-metre concourse between the East Hall and West Hall on a circular mode. Running at a speed of 62 km per hour, each APM carries 304 passengers in four cars. The APM operates every 2.5 minutes from 0600 to 0030 hours every day.

It transports passengers whose flights are located at the West Hall, Southwest and Northwest concourses. 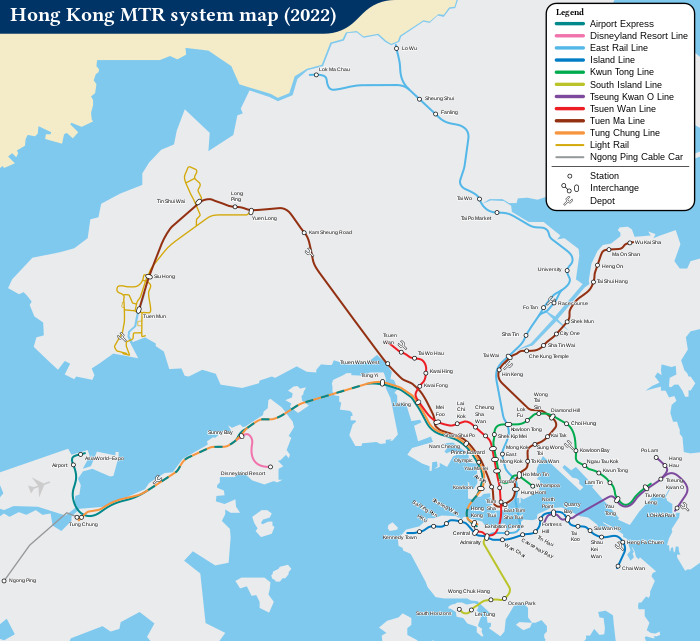