Isn’t it funny how you always identify yourself with your style?

You know, the whole “you are what you eat” thing?

Like, if you do Goju-ryu, you are Goju-ryu, or Shito-ryu or whatever… so to speak.

Even if you ended up with your current style just by luck, coincidence or some other external factor (parents put you in the school, friend got you started etc.), which is most likely, you will defend it at all costs when confronted by other stylists, as if you literally chose between a buffet of Karate styles before you finally decided upon your current ultimate one!

It’s like, other styles are “fun to look at“, and perhaps occasionally “fun to spar against”, but “it’s not my thing”.

I mean, you can always argue if a Shotokan kokutsu dachi is “better” (?) than a Shito-ryu neko-ashi or Goju-ryu sanchin-dachi; if the feet should be twisted like this or that; if the hikite should be here or there, but you can never argue against a raw bunkai smack in the face.

Or you can, but it will be from a hospital bed.

No matter what style you do.

In other words, exploring bunkai – the practical meaning of kata – is an excellent way of building bridges between styles.

Because every style has kata. And that’s one reason to why I love it so much.

So, with that new-agey fluff out of the way, let’s head over to the bunkai move of the day:

Featured in more Van Damme flicks than I can count to (well, that’s technically the jumping split kick, but whatever…) and quite many Chuck Norris movies too, the jump kick is one of the more flashier moves we have in Karate, although it is by no means a modern technique, since many old masters frequently wrote about legendary bushi (warriors) of Okinawa who were known for their jumping abilities and flying kick skills (one was even called “Bird Man” Makabe).

However, that doesn’t mean jump kicks are common.

Except in Kill Bill.

Sure, they might have been, in the Ryukyuan cradle of ancient Karate, but today we only have a couple of kata (evidence) left where they appear.

From the top of my dome:

Then we have some others where there is a 360 jump/drop (Kanku/Kusanku Sho, Unsu) but let’s leave those for now.

Okay, so, as always, let’s see what me and my loyal slav… “colleagues” came up with this time.

Note: Some of it is good, some is probably pure crap.

(It’s like when somebody tells you that they have no good ideas, and you go “Okay, so do you have any bad ones?”, and they are completely silent.)

So. Screwed” [said in a robotic sarcastic tone]. Your opponent has caught your first kick. You’re in big trouble…

Haha, sucker! Quickly snap your foot free as you switch legs and totally catch your opponent off guard.

Baow! Blast your opponent’s guts out.

Or, even better, kick him on his spring roll instead.

Your opponent attacks with a low kick.

Maybe he’s a Thai boxer (who knows?) or just plain stupid. (There is a very low level joke in there somewhere…).

Because, he doesn’t know about your secret blog based tobi-geri application skills!

Do a suna-uke, (block with your shin) 45 degrees angle (obiously!) and deflect your opponent’s low kick.

Then prepare for mayhem!

Bury your foot in your opponent’s skinny excuse for a stomach.

Or better yet, go for the crown jewels instead.

Okay, this time your opponent attacks with basically whatever, and you immediately respond with a low savate style kakato-geri, aiming for his knee, at a slight angle from the inside (for maximum unbalancing effect).

Then, of course, the follow-up is as obvious as the end of Inception wasn’t.

Do a “Semmy Schilt”, and knee him straight up his nose bone.

Booya! Well, you could change this to a regular kick too, depending on your preference, relative position, limb length, strength and such.

You are in a Muay Thai clinching position with your opponent. Too bad.

Fire off a frenzy of well placed knees (does two knees count as a frenzy?).

Make sure you are controlling your opponent in some way, by grabbing his/her shoulders, neck, clothes, hair, throat (will trigger a fancy pre-determined natural hand grasp response, thereby opening up the mid section even more) or whatever you see fit.

Obviously these knee strikes are done rapidly, the second strike capitalizing on the pain withdrawal reflex induced by the first knee.

Note: In kata you are often grabbing in a juji-uke type position (with fists closed) before the actual tobi-geri.

the kyokushin karate around the world 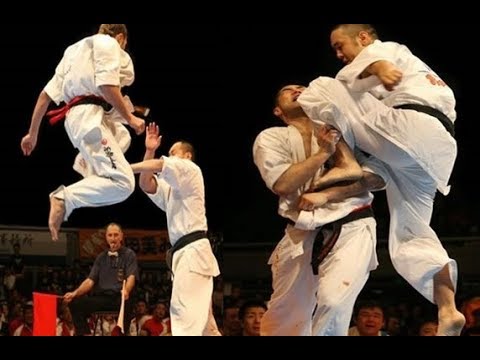 Your leg has been caught, again.

Complete disaster. What to do?

Well, do like the Thai boxers would do (what’s up with all these Thai boxing references anyway?) and charge strongly on.

Shoot forward, and step through.

Brakkaaaow! As you step through, you immediately grab your opponent and deliver a left knee straight to the sternum, or any other equally nice target.

Feel free to grab whatever comes your way for a better result.

Your opponent has been watching legendary Kazushi Sakuraba, King Of Single-Leg Takedowns™  instructional clips on youtube waaaay too many times, and suddenly decides to shoot for your legs, MMA style.

Or, he’s just an evil bum trying to shoot for some hamburger sauce you spilled on your shoes earlier today.

Hell to the no!

You need to escape quickly!

So, as your opponent shoots for your front leg, immediately lift it up and jump back – as if standing on hot charcoal.

Then, switch legs swiftly and stomp down on your opponent’s shoulder (for the nice version) or head (for the nasty version).

Obviously – let’s not fool ourselves – this will never work against somebody who actually knows how to properly shoot for a single-leg takedown.

So let’s pray that our evil bum is not a former college wrestler (or VERY hungry), okay?

Your opponent is, yet again, a Muay Thai expert – and decides to present you with a signature devastating low kick.

(Except this “fighter” seems to have no idea that he’s supposed to rotate his supporting foot and get his hip into the kick… hey, do you guys smell that too?

Quickly switch legs, and at the same time kick with your rear leg, as you “jump”.

Smack! Dig it in!

Or, even better, go for the nutz.

You have a nice hold of your opponent’s hand, garment or whatever, and you try to kick him, but before you manage to pull him to you… he does like the tree, and leaves (I’ve always wanted to write that one!) making you miss your target completely!

And we can’t just let that leg hang there all alone, can we?

So immediately do a leg switch as you drive forwards, pursuing your enemy, kicking him with your other leg.

Of course you can grab with both hands instead of one, depending on the context (kata).

Our beloved jump kicking expert is about to exit a door, right? But, lo and behold, it is closed!

What evil people would lock an emergency exit?!

Well… here’s the answer. Behind him, from nowhere, approaches an evil Karate gupsy!

Just look at those sneaky eyes…*shiver*

It seems we have a serious problem on our hands…

It seems there is only one way to go.

Using the first “knee raise” as a giant step/leap, take the initiative (“sensen no sen”, preemptive movement) and fly right through your opponent before he even has time to flip up his hidden stiletto knife.

Quickly pick up all the stolen loose change that he drops, and then do like Van Damme and split.

“No way!” As you made your way home, escaping from the previous scenario, your opponent’s evil twin brother catches up with you!

And this time he has backup!

Time to open up a can of that epic whoopass.

And then confront the evil gupsy sidekick in front of you, kicking his thigh to pieces.

Or some other appropriate target.

Wait until you see the last one…

As you narrowly escaped the last situation, your evil opponent’s second (!) gupsy twin brother catches up with you.

And he has got even better backup!

Can it even GET any worse?!

For your opponents at least!

Not caring much for the opponent behind you (his hands are busy anyway), kick your opponent in front with one leg…

And immediately kick him with your other, as you recoil your first leg.

The rest you’ll have to figure out yourself.

And that’s basically it. Eleven (somewhat) practical bunkai to Karate’s jump kick, tobi-geri. Okay, those last ones might have been more fun than practical, but wut-evv-urr…

Personally I am a bit sceptic against training for these sorts of situations (bunkai) where you are attacked by more than one person.

But that’s just me…

Anyhoo… let me know if any of you smarter (though arguably less handsome) dudes or dudettes come up with other bunkai.

I’d love to hear it.

And no jumping over dead ninja bodies in a rice paddy field things, mmkay?

How easy is it to make money in binary options