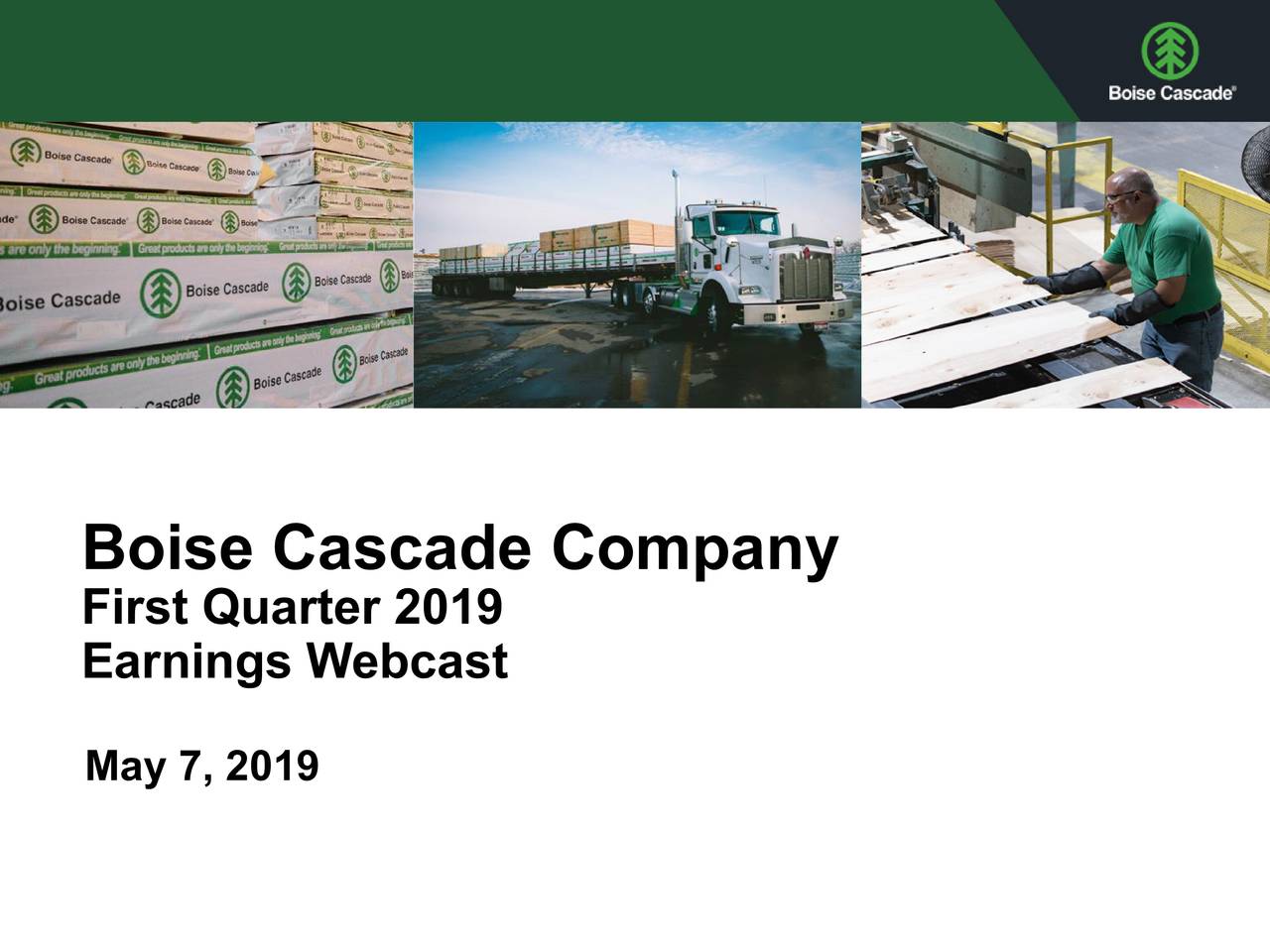 A public company with sales over $5 billion in 2017, it is traded on the New York Stock Exchange (NYSE) under the symbol BCC.

The company has approximately 6,400 employees across North America. Its logo, designed in the 1960s, depicts a pine tree inside the containing circle.[2]

Boise Cascade Corporation was formed in 1957 through the merger of Cascade Lumber Company of Yakima, Washington, and Boise Payette Lumber Companyof Boise. Robert Hansberger of Boise Payette became the CEO, and the new corporation focused on ownership and management of timberlands, the growing and harvesting of timber, and the manufacturing and distribution of lumber products and building materials.

By late 1958, the company had established more than 100 retail outlets for its wholesale distribution business.

The 1960s saw the company's swift expansion into the forest products industry, as well as wide variety of other businesses.

Boise Cascade owned concrete ready-mix plants, plastic manufacturing plants, textiles, and sand and gravel companies. In 1964, the company entered office products distribution. The mid 1960s brought an even more diverse portfolio including ownership of a motor home manufacturer, a cruise line, involvement in real estate and recreation projects, and an acquisition in the engineering and construction business for major utilities.

With the share price at around eleven dollars, Hansberger resigned in October 1972;[9][10] John Fery was promoted to CEO and moved the company back to its core competencies of building materials and paper products.[11][12] As the 1980s progressed, a decline in the housing market led to a downsizing in building products distribution business, and by 1987, all retail outlets had been sold or closed.

In the early 1990s, the company sold the wholesale portion of its office products distribution business while keeping the consumer business. In the 1990s, Boise Cascade invested in engineered wood products, building mills in White City, Oregon, and in Alexandria, Louisiana, for producing LVL. Boise Cascade introduced the finger-jointing technique for manufacturing LVL that remains unique to the EWP industry today.

After leading the company for 22 years, Fery retired in 1994,[12] and George Harad was named CEO. During his tenure, the company focused on expanding its activity in distribution and reducing its presence in manufacturing.

In 1999, Furman Lumber of Billerica, Massachusetts, was purchased, which led to a nationwide building material wholesale distribution system for Boise Cascade.

The next decade continued to bring big changes. In 2003, the company acquired OfficeMax and Boise Cascade Corporation changed its name to OfficeMax.

Madison Dearborn Capital Partners purchased the paper, forest products and timberland assets which became Boise Cascade, LLC. When Tom Stephens began as CEO of Boise Cascade, LLC in 2004, the company had incurred $3.2 billion in debt to fund the acquisition. The company's 1.6 million acres of timberlands were sold in 2005 to help pay down that debt.

Three years later, a publicly traded shell company bought the pulp and paper operations and became Boise, Inc., allowing Boise Cascade to pay off most of the remaining debt.

The timing was fortuitous when, in 2008, the housing market collapsed and tough times ensued for the entire industry. Tom Carlile assumed the position of CEO in 2009, and began to lead the company through the slow housing recovery with investments in EWP and veneer facilities and the building materials distribution footprint.

By late 2012, the company prepared to launch an IPO, which was completed on February 6, 2013 when it rang the bell at the NYSE.

Tom Corrick was named CEO in 2015 and is leading the company today.

These facilities are located in eight states in the Pacific Northwest and southeastern U.S., and one mill in Canada at St. Jacques, New Brunswick. 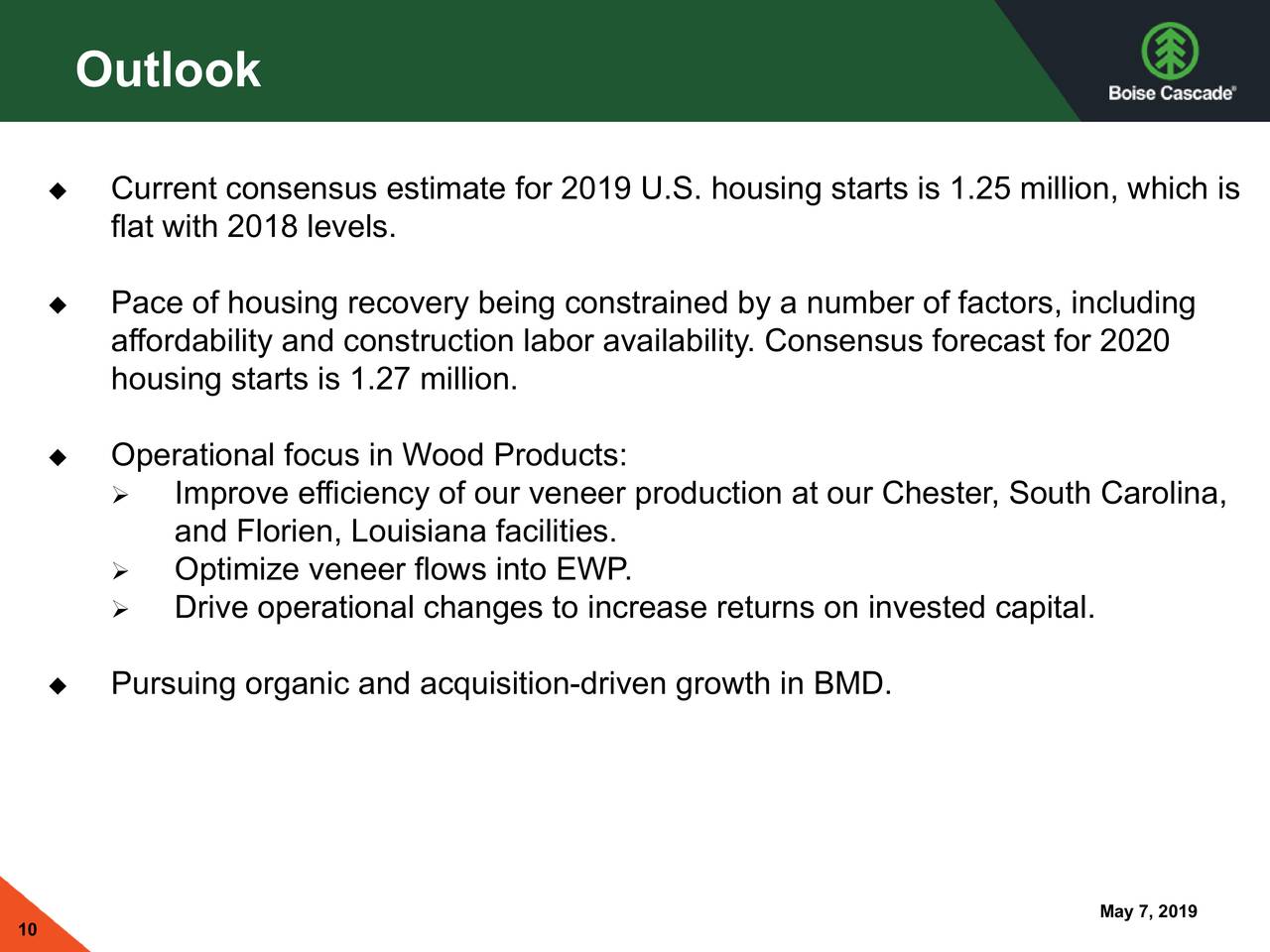 BC owns and operates the world's two largest laminated veneer lumber (LVL) and I-joist manufacturing plants, and is the #2 producer of engineered wood products and #2 producer of plywood in North America.

The division delivers orders by truck and rail to home improvement centers, retail lumber dealers, and industrial customers. There are 35 distribution branches nationwide, making it the largest wholesale building products distributor in the U.S.

Boise Cascade does not own forest lands, so the company procures all of its timber to operate its mills from with Federal, state, and private landowners.

The company's environmental management system controls the procurement of all forest-based fiber for its mills, providing supply chain assurances regarding legality of fiber, exclusion of controversial sources, and compliance with mandatory resource and trade legislation.

Boise Cascade has earned certifications through the Sustainable Forestry Initiative® (SFI®), the Forest Stewardship Council® (FSC®), and the Programme for the Endorsement of Forest Certification™ (PEFC™). Nearly 100% of the wood brought into its mills is used and almost no waste is landfilled; for example, after making the primary products, the bark and wood residuals can be used to heat dryers, produce particleboard, or sold to make paper.

From a greenhouse gas emission perspective, wood is a superior building product as it sequesters carbon in the structure as well as minimizing the use of non-renewable carbon-based fuels. Finally, Boise Cascade's I-joists, which are used in approximately one of every seven houses built in the U.S., use about 50% as much wood fiber as the dimension lumber products they replace.

After over-extending into non-traditional areas under CEO Hansberger and young CFO Agee,[6] the company nearly went into liquidation in 1972. A management team under new CEO Fery got the company back to basics through the rest of the 1970s.[12][13]

After the purchase of OfficeMax in 2003,[14][15][16] Boise Cascade separated its distribution and manufacturing businesses the following year.[17][18] The pulp and paper assets of Boise Cascade L.L.C.

were sold to an investment firm in 2008, then acquired by Packaging Corporation of America in 2013 and became its Boise Paper division.[19] Boise had entered the paper side of the forest products industry in 1958 with a new mill in treeless Wallula, Washington.[3][4] 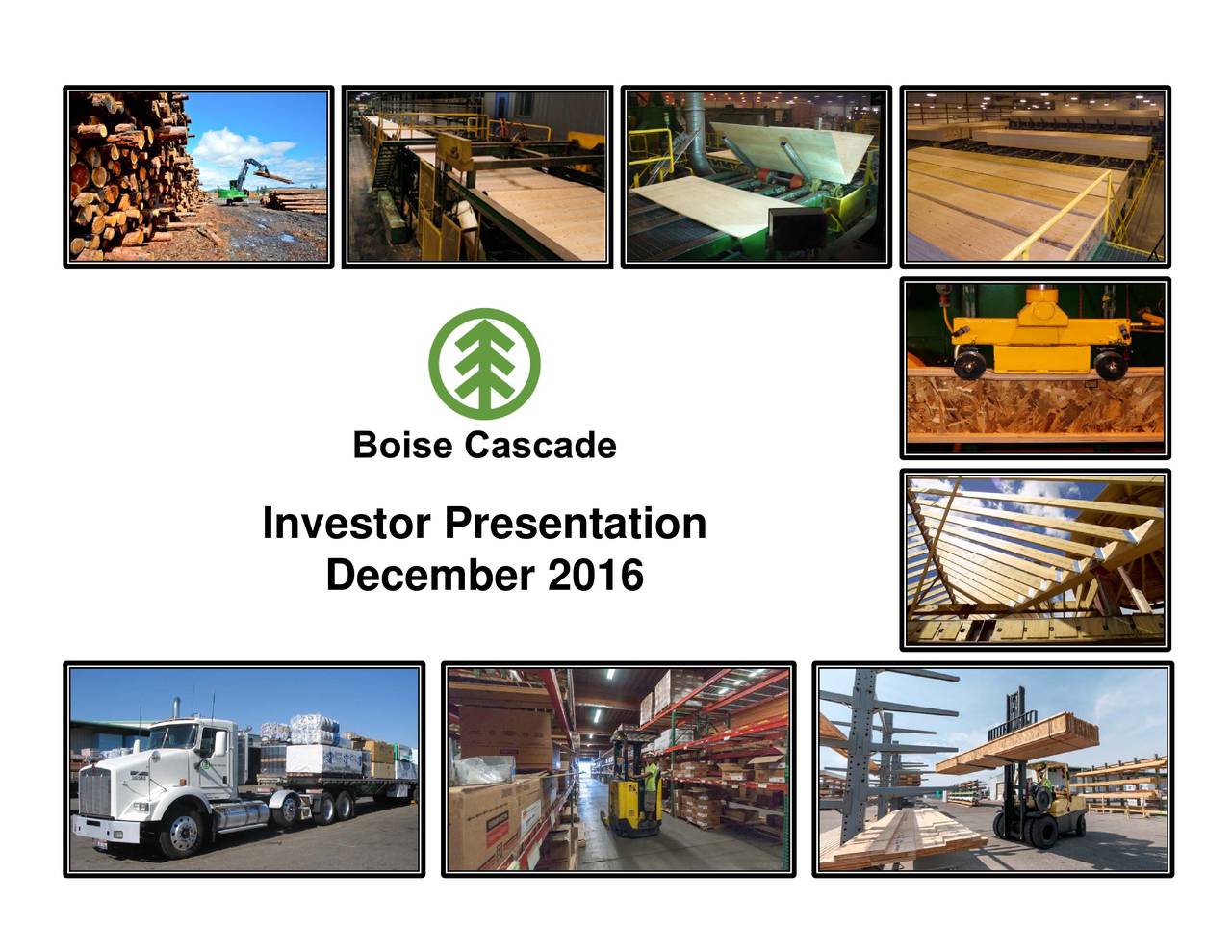 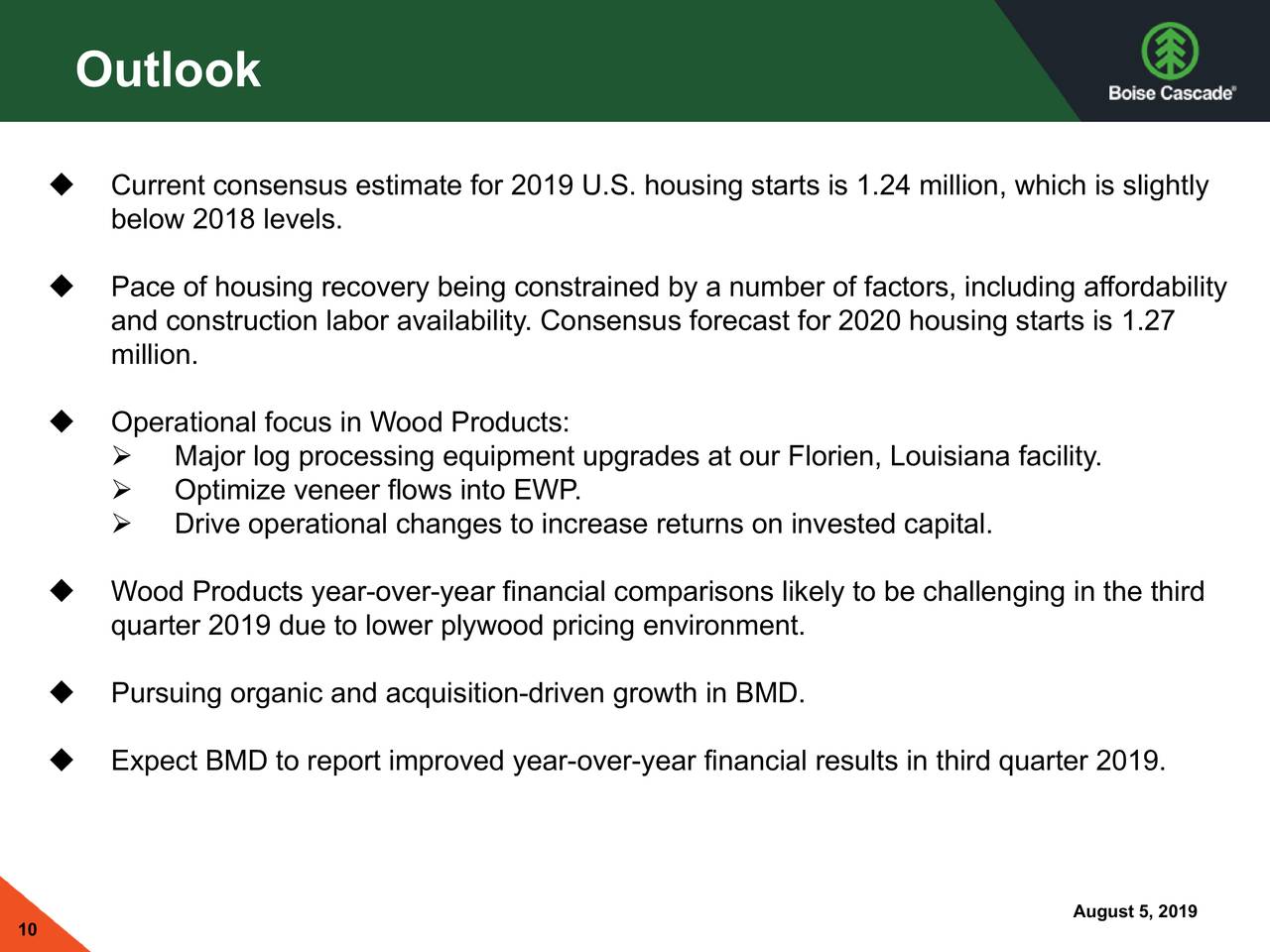 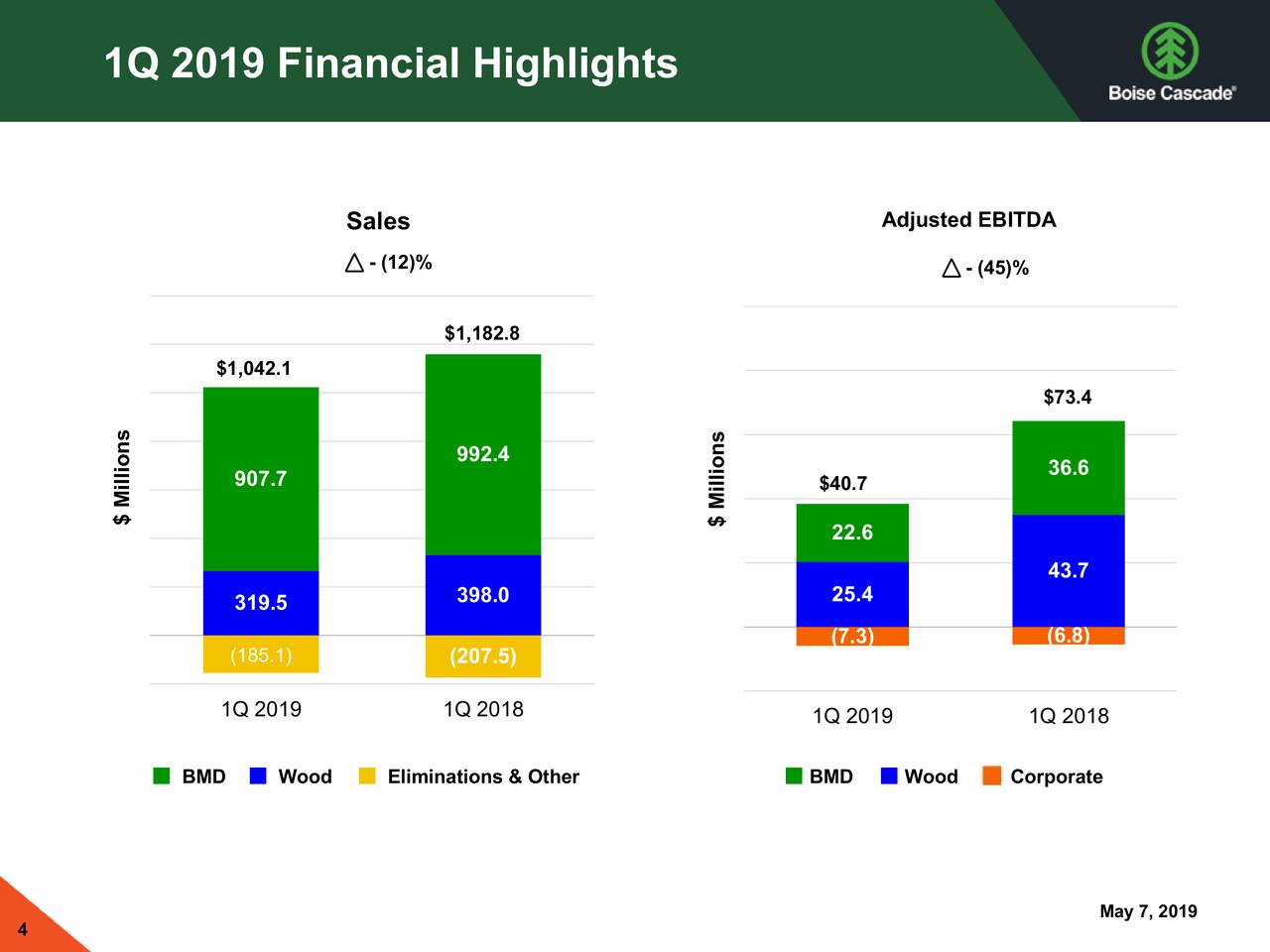