Flashback is Round 1209 of Morikawa Jouji's Hajime no Ippomanga series.

Yagi is glad that Ippo retired himself, instead of making the coach force him to retire.

Kamogawa notes that the issues Ippo was having with his body, they were all signs that Ippo may have been punch drunk already, and he was on the verge of suffering permanent damage.

Kamogawa comments that there is a report written by Dr. Kiniski, an expert on the topic, that notes how the symptoms are similar to a lot of other medical conditions, where it makes it difficult to correctly diagnose someone as punch drunk at such an early stage.

If Ippo had gone any further, his daily life could have been affected, where he may have truly become broken.

Since the Specialist that Ippo saw was pretty reputable, Kamogawa is now able to put an end to all those doubts he had about Ippo's condition, and he's glad that Ippo was diagnosed as being healthy. Kamogawa mentions that Ippo will be the last boxer he ever trains, and he thanks Ippo for letting him dream.

Itagaki, Kimura, and Aoki are on the roof watching Ippo leave. Aoki tells Itagaki that he can watch all he wants, but Ippo isn't coming back.

He mention that Ippo might not be a Pro Boxer anymore, but Ippo will still come by the gym from time to time, and that Itagaki will still be working with him.

Kimura tells Itagaki to remember when they played baseball (in Round 701), he mentioned "that this group wouldn't be able to have fun like that forever." However, Kimura thought he would be the first person to retire at the time.

Kimura's goal was to do everything he could so that when he left, he would be able to say, "I was glad I started boxing and glad I came to the Kamogawa gym." He mentions life is unpredictable.

Itagaki wonders if Ippo has any regrets. 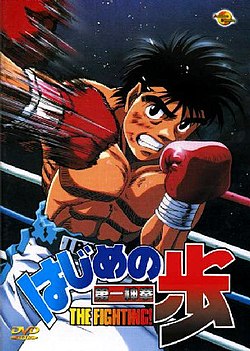 Kimura tells him only Ippo knows, but when he was smiling and waved good-bye, Kimura was a little jealous of him. Aoki thought it was anticlimactic, and mentions when Geromichi left, they gave him a goodbye spar (in Round 149).

Takamura comes to the roof and mentions that if they did that with Ippo, where they trashed him and split his skull open, who knows what would have spilled out.

Itagaki asked if Takamura said anything to Ippo as he left.

Aoki and Kimura thinks Takamura kicked him while he was down, or didn't said anything good.

Instead, Takamura asked Ippo, "If he got any good treasure."

Ippo looks at leaves blowing in the wind. With Ippo thinking that "I got more treasure than I could ever carry.